Today I am delighted to invite on to my blog fellow author Alison O'Leary.

What genre would you say your novels fall into, or do they defy classification
Street Cat Blues is my debut novel. I would say that the general classification is crime, probably on the cosy side, but with a definite dark edge. It does have a cast of cats in it but it is set very firmly in the human world. It deals with some quite strong issues concerning racism, illegal immigration and class although I’d like to think that there’s some humour in there too.

What made you choose that genre?
When I was about twelve, I was stuck at home suffering from asthma. I picked up a copy of an Agatha Christie book and it was the start of a life-long love of crime fiction. For me, crime fiction allows terrific scope for great characters as well as introducing the puzzle element which, if done well, draws the reader in and propels them forward. I also studied law and for many years taught criminal law and criminology.

How long does it take you to write a book?
Difficult to say. Street Cat Blues was actually started quite a few years ago. I would put it down and start something else but I always went back to it. So, in that instance, quite a long time!

What is your work schedule like when you’re writing?
Not as structured as it should be. We’re told that ‘a writer writes’ and I try to write every day but other things often get in the way. Like many writers, I’m probably too easily distracted. Before I was published, I was a bit more relaxed about it but now I’m trying to get the sequel out I give it priority.

Tell me something about yourself that your readers might not know.
I’m very keen on British stamps. I’m not sure how I first got into stamps, it might have been when I was about eleven and my school ran a trip to Stampex, which is an annual national stamp exhibition. When I was twelve (in between reading Agatha Christie books) I was awarded a Highly Commended in a national stamp competition. I was terribly proud of it and still am – it’s the only thing I’ve ever won!

When did you write your first book and how old were you?
I’ve written bits and pieces off and on for as long as I can remember but I think the first complete book, i.e. one that I actually finished was when I was about forty. So, quite a late starter.

What do you like to do when you’re not writing?
I still look at my stamps although I have to ration that because once I start the day seems to run away with me. I also enjoy cross-stitch and embroidery, British movies, walking by the sea and reading. I mostly read crime fiction but I’ve recently discovered books by Lissa Evans which I’m enjoying hugely. Last, but by no means least, I do like a glass (or two) of wine.

What was one of the most surprising things you learned in creating your books?
I think that one of the things that surprised me the most is that on occasion a character will appear out of nowhere and somehow fit in perfectly. In Street Cat Blues there’s a little, not very bright, cat called Moses and I have no idea where he came from. However, I grew to be very fond of him. At one point in the book he is placed in jeopardy and a number of readers have told me that they really feared for him.

How many books have you written?
Altogether, I’ve written four. The first two did get picked off the slush pile by agents but then didn’t make it through to publication. The third, frankly, wasn’t that good and I don’t think I even submitted it anywhere. I was probably a bit demoralised following the disappointment with the first two books. The fourth book was Street Cat Blues. I submitted it a number of times and had more or less resigned myself to putting it on the shelf  and possibly giving up altogether when I decided to give it one last go. After that it all happened really quickly. The publisher got back to me almost by return and within a couple of weeks I had a contract.

Do you Google yourself? What did you find that affected you most (good or bad)?
I don’t really Google myself very often but your question just prompted me to do it! However, there’s not a lot about me out there other than that relating to Street Cat Blues so, to date, it hasn’t given me any surprises.

What did surprise me was the requirement for authors to have such a strong social media presence. When I was teaching, I tended to stay away from social media as so many of my students used it and I had seen colleagues caught in some embarrassing situations. Once I had a publishing contract, I discovered that I really had no choice. It was a very steep learning curve, but that doesn’t necessarily make it a bad thing. I was rather fearful to start with but I’ve discovered that it’s a lovely way to interact both with readers and fellow writers, as well as keeping up to date with what’s being published and by whom.

One of the nicest things was when a reader told me that she’d used Street CatBlues in a teaching session as an example of good use of narrative. I was particularly pleased because the group she was using it with was a group of rather difficult adolescents. Apparently, they loved it.

As a child, what did you want to do when you grew up?
I wanted to be an ice skater or a writer. When I was a child, I took to the ice the first time I went skating and used to go pretty much every week to Queens skating rink in London. I loved it. Quite recently I went on the ice in Brighton and really struggled. In fact, at one point I fell over! 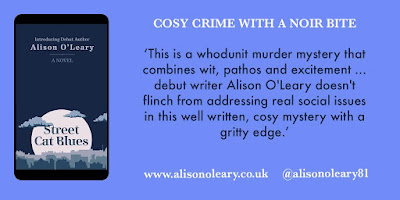 Bio
I was born in London and spent my teenage years in Hertfordshire where I spent large amounts of time reading novels, watching daytime television and avoiding the kind of school where girls did needlework and boys did woodwork. Failing to gain any qualifications in science whatsoever, the dream of being a forensic scientist collided with reality when a careers teacher suggested that I might like to work in a shop. I don’t think she meant Harrods. Later studying law, I decided to teach rather than go into practice and spent many years teaching mainly criminal law to young people and adults.