Friday Fiction Feature: Only One Woman

For my very first Friday Fiction Feature, I am delighted to have Jane Risdon talking about her book, co-authored with Christina Jones, Only One Woman.

'A fun and touching look at the Swinging Sixties' - Books Life and Everything
'It's a time portal, bringing nostalgic glimpses of the 60s' - Pink Heart Society
'A truly big love story' - ReviewSpot

Lorraine, thanks so much for asking me to be your first guest. I am really excited to be sharing information about writing Only One Woman with Christina Jones.

Long ago a young girl met and fell in love with a rock musician whom she eventually married. His band hired another young girl – a rock/pop journalist - as their fan-club secretary and both girls became friends. They both loved writing and vowed one day they’d write a book together.

Fast forward almost 50 years and the musician’s wife has been working in the international music business for decades with her husband, managing recording artists, songwriters, record producers, and placing music on to the soundtracks of movies and television series, living overseas and travelling the world constantly, never staying in one place very long.

During that time the journalist has become a successful best-selling, award-winning author of Bucolic romances, and there seemed no way the two women could ever write together - never being in the same country, let alone the same county at the same time.

The music business began to change and it was time for our music couple to rethink their futures; they semi-retired from babysitting testosterone-fuelled musicians and PMT stricken singers and they began to do what they’d both always wanted. They relocated to England and he went back to song-writing and messing about on his guitar all day and she decided it was time to fulfil her dream to write crime novels. And she wrote constantly for a couple of years, publishing her writing, quite happy in her chosen genre.

Chatting with her friend, Christina Jones, one day, it was clear the two ‘girls’ continued to dream of writing together, but Christina wrote Bucolic romances and that didn’t fit too well with the stories her friend was writing, so their dream was put on the back burner again – until one day!

‘One day’ came out of the blue whilst our writer was researching in preparation for yet another crime novel she was planning about a rock band who get involved in a murder. She spent many hours ploughing through their memorabilia, discovering old band photos and touring schedules for background for her story. She found fan mail, posters from venues, chart entries in old music magazines, and lots of other items which she began to use to outline her book.

Her book was set out as a diary written by a young girl of 16, Renza, who meets and falls in love with a guitarist, Scott, and about half way through the book the story took a strange direction. No longer was it possible to fit a murder into the plot. Much to our writer’s amazement the story was turning into a romance which was confusing because the writer had never even read a romance let alone attempted to write one before. 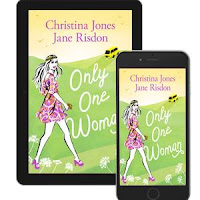 It soon became clear that the story needed another voice and she sent it to her friend to read and comment upon with the hope she’d love it so much she’d want to write another character into the story. And Christina did. She loved it and set about writing from the point of view of Stella, which was quite a feat, considering the plot and most of the main characters were already written. Christina did a ‘stella’ job.

During this time the pair never physically wrote together - never being in the same room - and apart from a few exchanged emails initially, Christina set about writing her parts in the book without her writing partner ever reading what she wrote. Both writers were signed to Accent Press and Christina sent a synopsis and a few chapters to their publisher to test the water.

It was accepted and the girls began edits with their editor - actually, editors - as several came and went during this time. In fact the writer never read the completed book with Christina’s parts until she began to do her edits.

However, one of the later editors decided that she wanted additional chapters (diary entries) and both girls set about writing as requested. By the time Only One Woman was finished it ran to 500 pages (160,000 words). It was published in Paperback May 2018.

Only One Woman is set in the UK music scene of 1968/69 and tells the story of two young girls in love with the same lead guitarist who cannot bring himself to let one of them down. The book isn’t only a love triangle, it is a social commentary on the era – world events, social changes, the music and fashions of the 1960s create a memorable experience for the reader. It’s an emotional story dealing with family conflict and is set in England, Scotland, Jersey, and post-war Germany, and everyday events remind the reader of a world very different to that we experience today. Readers tell us it stays with them long after it is finished and often they return to read it again and again. Guys love it as much as gals and musicians enjoy revisiting familiar music venues, recalling life on the road before huge trucks and stage sets, when transit vans took them all over the British Isles and Europe. 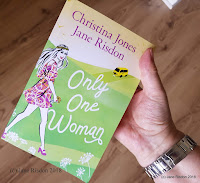 The title, Only One Woman, was inspired by the 1968 hit single of the same name written by The Bee Gees for the now iconic rock singer, Graham Bonnet, and his late cousin Trevor Gordon (The Marbles – at the time). Graham kindly agreed to write the foreword to the
book and explains how he owes his singing career to The Bee Gees, how they came to write for him, and what our book means to him. Graham went on to sing with legends Rainbow, Michael Schenker, Ritchie Blackmore and others and is now fronting The Graham Bonnet Band.

Amazon Author Page: https://www.amazon.co.uk/Jane-Risdon/e/B00I3GJ2Y8
Paperback from Waterstones and WH Smith: ISBN  9781783757312
Website: https://janerisdon.com
Featured on theauthorsshow.com: https://wnbnetworkwest.com/WnbAuthorsShow6.html
Follow the link, look for Jane Risdon and Only One Woman in the grey box on the left, click on the name and then click play to hear 15 minutes of interview including an extract from Renza’s Diary in 1968, when she visits Carnaby Street for the first time.
Facebook Page: https://www.facebook.com/JaneRisdon2/
Twitter: https://twitter.com/Jane_Risdon
Instagram: https://www.instagram.com/janerisdonwriter/
MeWe: mewe.com/i/janerisdon
Pinterest: https://www.pinterest.co.uk/janerisdon2/