Friday Fiction Feature: I Could Be You

My latest book, I Could Be You, is a crime novel set in Eastbourne. It’s the start of a new series, featuring jaded journalist, Dee Doran. I’m originally from Ireland, but I’ve been living in Eastbourne since 2013. I moved here, with my family, after spending over twenty years in London. Having grown up by the sea, I was desperate to escape the city. By sheer good luck, we chose Eastbourne as our new home.

Nestled between the coast, with far reaching views across the English Channel, and the start of the South Downs National Park, Eastbourne is stunning. From my house, on the edge of town, I can walk to the beach, across the south downs and along the jagged coastline of majestic white chalk cliffs to Beachy Head and beyond. It’s an area steeped in history and beauty.

I’ve always believed location is a key part of what makes a good crime series. My previous novels are all set in south east London, where I lived for many years. Now I was in Eastbourne, I wanted to make this the location for a new series. 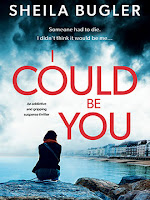 As it turns out, I wasn’t the only person who thought the location was perfect for crime! The recent TV series Flesh and Blood is set in Eastbourne. In fact, the family home is on the same stretch of beach where my protagonist, Dee Doran, lives. If you’ve watched the series, you’ll already know how gorgeous it is.

Dee is an investigative journalist in her early fifties. She’s taken a career break following the end of her marriage. I’m often asked why I chose a main character who’s a journalist, not a detective. The simple answer is I felt like a change. I’d already written a series featuring a female detective.

Like me, Dee is in her early fifties. This is also deliberate. I’m in my early fifties and I wanted to write about a character the same age. I love women my age – we’re old enough to know what we want, and young enough to still enjoy life! We’ve aged and are well beyond the first flush of youth, but we have a wealth of life experience behind us and plenty more years ahead of us.

Dee’s fifth decade hasn’t got off to the best start. Her marriage has broken up and both her parents have died. The only thing that’s kept her going has been her neighbours – single mother, Katie, and her two-year-old son, Jake. Then one hot summer’s day, Dee finds Katie’s dead body on the road outside her house. Beside it, Jake’s empty buggy. No Jake. He’s disappeared.

As the murder investigation gets underway, Dee’s determination to find Jake is the only thing that keeps her going. But the more she learns about Katie, the more Dee realises she never really knew her neighbour. Katie was keeping secrets. Because of that, one woman’s already dead. If Dee’s not careful, she’ll be next.