Today I am delighted to feature an interview with Martin Jones, author of Best Eight. 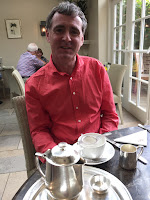 1. What genre would you say your novels fall into, or do they defy classification?

Classification has always been a bit of a problem.  Nick Hornby’s Fever Pitch, inspired my early efforts, except they organised biographical material around things like famous album tracks rather than football matches. My children’s novel, Secret Street, about a girl with a secret love of geology, could be called “coming of age”. Best Eight, published this month, is science fiction. It is true that an editor at Hachette did not agree.  But if I may...  Science fiction is a very diverse genre, covering the portrayal of science in the future, and often in the present and past as well, except where it doesn’t involve science at all, as in speculative fiction, alternate history, or in the related category of fantasy.  Writer Damon Knight has described sci-fi as “what we point to when we say it”. So setting out to write sci-fi only to have an editor suggest that the book does not fall into that category, seemed like a bizarre achievement,  You could say that science fiction is what we point to when we say it, except for that book Martin Jones wrote. But no, we can’t say that.  The book cannot claim to be so unique.  It’s science fiction.

2. What made you choose that genre?

Science fiction has always been a favourite of mine.  For me, it’s right up there with the novels of P.G. Wodehouse.  I once read the work of author Jack Vance after hearing he was a fan both of sci-fi and Wodehouse. Whilst enjoying Vance’s work, it was difficult to find much Wodehouse in it.  On some level, Best Eight was an attempt to fill this unfortunate gap.

A long time is the short answer.  Best Eight took ten years, on and off.  Other novels did not take as long as that.  And the novel I am currently writing is shaping up after a year or so.

4.  What is your work schedule like when you’re writing?

Before March this year I would write for two hours in the morning, and then go to my day job in a pharmacy. Since the middle of March I have been on medical lock down, unable to leave the house.  So now, it’s chores in the morning, followed by forty minutes of exercise.  The rest of the day is free for writing.  The evening is for reading, relaxing and watching Grace and Frankie on Netflix.

5. Tell me something about yourself your readers might not know.

I am a trained sports massage therapist.  This was the answer I gave to the same question, asked at an interview for a Christmas job at Argos.  It seemed to work quite well on that occasion.  They offered me the job.

6. When did you write your first book and how old were you?

I actually started out trying to write stage plays at university - my first one imagined vast equipment at a high tech London show going wrong and turning the theatre upside down.  A motley group of actors, theatre staff and audience members had to escape to the bottom the theatre, like in the Poseidon Adventure.  I was eighteen then.  Those Nick Hornby inspired novels came a couple of years later, just after university.

7. What do you like to do when you're not writing?

Reading, obviously.  I have this scheme which alternates classic novel with new novel.  Music has always been a passion. Before lockdown, cycling the byways of Kent was my favourite form of exercise.

8. What was one of the most surprising things you learned in creating your books?

Hmmm.  Interesting.  Perhaps the most surprising thing I learned was the way confidence can exist alongside an equally profound level of doubt. Within candy floss clouds of diffidence, there is a small rock of determination - not so much a rock as a chunk of neutron star. It’s odd how these opposites can exist so naturally together.

9. How many books have you written?

It took me a minute to work that out.  There have been seven novels.  And one nonfiction book about the Sergeant Pepper album.

10. Do you Google yourself? What did you find that affected you most (good or bad)?

I don’t Google myself, always assuming there’s nothing there.  Let’s have a go now... This is fun. Graham Norton does this sort of thing with his guests. Well, Jones is a common name so there are lots of Martin Jones.  My blog is listed, along with entries for a number of other Martin Jones authors, who seem to be doing very well with their writing.  There’s an archaeologist who has written ninety-seven books, his latest about why humans share food. What have I been doing with my time?  And there’s someone who writes horror stories.  So not much to see with regard to me personally.

At primary school it was astronaut, fireman, and very briefly glazier, after a man came to fix our school window and seemed happy in his work.  I thought about being a musician for a while - making some pocket money in my sixth form years playing the French horn in show bands.   But writing ambitions always lurked, and had completely taken over by the time I finished school.

12. How many unpublished and half-finished books do you have on your computer?

On my computer there’s a novel about a pharmacy worker who takes part in drug trials seeking conscious control of dreams.  There are also three drafts of a “steam punk” novel where a nineteenth century London tosher gets himself involved with a secret society, which has developed the technology necessary to produce glam rock music.

All other unfinished or unpublished novels/plays/film scripts/poems are piles of paper in the attic.

Thank you for the interview, Lorraine.  I really enjoyed answering your questions.

Author bio: Martin has been writing since he left university in the 1980s.  He has published two novels, run a website for historical visiting, and won prizes for his short stories.  He lives in Kent and is married with one daughter.