Digging Deeper into When the Dead Speak by Sheila Bugler

When the Dead Speak is the second book in my Eastbourne crime series. The books are set in my adopted home town, Eastbourne, and the central character is a journalist called Dee Doran. 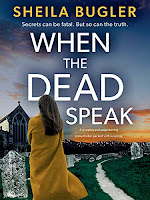 In her early fifties, Dee is divorced and lives alone in a beachfront house on a deserted stretch of beach on the outskirts of town. I created Dee because I wanted to explore what life is really like for ‘middle-aged’ women, who’ve chosen a career over a family.

I love Dee. She is menopausal and moody; she’s smart, funny and opinionated. She’s a loyal friend, with a big heart. She enjoys a glass – or several – of wine, and has unsuitable romances. She’s a combination of all the brilliant women I’m lucky enough to call my friends.

When the Dead Speak is set in two time periods: 1960 and today. In 1960, a young woman is brutally murdered. The victim, Mary Palmer, has auburn curly hair, blue eyes and a smattering of freckles across her nose. When her body is found, laid out on the altar of a local church, someone has cut off all her hair.

In 2020, another young woman is murdered. Her name is Lauren Shaw. She has auburn curly hair, blue eyes and a smattering of freckles across her nose. When her body is found, laid out on the altar of the same church, someone has cut off all her hair.

The similarities between the two murders send shockwaves through community. There are enough people alive who remember the tragedy of Mary’s murder, and the effect that had on everyone involved. Now, it seems as if history is repeating itself.

Dee is as intrigued as everyone else, but she’s also focused on her investigation into the whereabouts of a missing woman from the Polish community. The police weren’t interested, but Dee’s journalistic instincts tell her something is amiss.

Dee’s investigations lead her right back to 1960, and the original murder. Back then, someone went to a lot of work to make sure the killer was never caught. Sixty years later, there are still people who will stop at nothing to make sure Dee doesn’t find the answers she’s looking for.

A CONVERSATION BETWEEN THE PROTAGONIST AND ANTAGONIST

Dee strode across the hotel lobby.

‘I’m here to see Derek French,’ she informed the young woman behind the reception desk.

‘Is he expecting you?’

‘Tell him Dee Doran’s here. And that I’m not leaving until he sees me. I’ll be in the bar.’

She walked away without another word. In the bar, she ordered a sparkling water, took a seat and waited. She’d only been there a few minutes when Derek joined her, settling himself into the chair opposite Dee.

‘Scotch on the rocks, Jim,’ he said to the waiter hovering nearby. ‘And this lady’s drink is on the house, okay?’

‘I’m happy to pay for my own drinks,’ Dee told him, as Jim slipped away to get Derek’s drink.

‘So,’ Derek said, ‘to what do we owe the pleasure today?’

‘I wanted to ask you some questions,’ Dee asked.

‘If it’s about your Romanian friend, I’ve already told you, she wasn’t here the night she disappeared.’

‘Polish,’ Dee said, pointlessly because he was still talking, and didn’t seem to have noticed she’d spoken.

‘She’s done a bunk. They get restless, these foreigners. Can’t stick at one thing for too long. They’re not reliable, see? It’s why I don’t employ them.’

‘I saw Kyle yesterday,’ Dee said, leaning away from the smell of his cologne and the stink of his racism. ‘He’s still pretty upset, isn’t he?’

Jim had reappeared with their drinks. Derek waited for him to set them on the table in front of them before he spoke.

‘His girlfriend’s just died. What do you expect? But he’s still young. He’ll get over Lauren. Give him a year and he’ll have moved on, found someone else. Truth is, Lauren was far too ambitious for him. She would have got sick of him sooner or later. Don’t get me wrong, he’s a lovely kid. But if he had his way, he’d spend all his time surfing and hanging out with his surfing mates. I mean, it’s fine for a hobby but no one’s going to make a living out of being a surfer these days.’

‘You think he minded that she was more ambitious than he was?’ Dee said.

Derek took a sip of his drink.

‘Macallan single malt. Heaven in a glass. Would you like me to order you one?’

Dee shook her head, waited for him to continue.

‘I think Lauren minded. She had big dreams - money, fame, that sort of thing. She was never going to achieve all that with our Kyle. She needed a different sort of man and she knew it.’

‘Are you serious?’ Derek’s face darkened. ‘She was my son’s girlfriend. I would never have touched her. You’re worse than she was, do you know that? Digging, digging, digging. Looking for a story even when there isn’t one. You can’t keep coming in here sniffing about, implying all sorts of shit and acting like you’re someone important. You’re not a detective. I’ve had enough. I want you to leave and I don’t want you to see you inside this hotel again. You got that?’

The sudden shift from smarmy to threatening was unexpected.

Derek leaned forward, pressing his face so close to hers their noses were practically touching.

‘Get the fuck out of my hotel. And keep away from my family too. If you go anywhere near my Kyle again, I’ll report you to the police.’

‘Thanks for your time.’

Dee stood up and left before he could say anything else. She’d got to him. But not for the reason she’d come here. His disgusted reaction to her questions about Lauren made her fairly sure he hadn’t been sleeping with his son’s girlfriend. Which meant there was something else Derek French didn’t want her to find out.

Amanda Redman is my perfect Dee. In the vague chance she might be reading this - Amanda please play Dee Doran! You’re perfect for the part!

Ian Puleston-Davies would make a great Derek French. He has just the right combination of charm and underlying menace. Again, Ian if you’re reading this, my contact details are at the end.

2.     What is the weirdest disposal of a body in any of your books?

The two murders at the heart of When the Dead Speak are the probably the weirdest way I’ve dealt with a dead body.

In both cases, the woman’s body is laid out on a church altar, her throat has been cut and her hair has all been chopped off. The discovery of both bodies includes a description of wisps of auburn hair floating around the church. This is the way I describe the scene in an early dream sequence:

Sunshine streams through the stained-glass windows. Something is dancing in the air. Shades of amber and copper, captured in the light. When I put my hand out, some of it lands softly on my palm. The texture reminds me of the barbs of a feather, but this, in my hand, is no feather.

I let the strands fall, watching them drift down to the stone ground. A gust of wind blows through the church, stirring it all up again. The pieces whip through the air, brushing against my face and clogging the inside of my nose and throat when I try to breathe.

Hair. Lots of it. All around me now, covering the floor of the church like a carpet of gold confetti, sticking to my skin.

DETAILS OF MY LATEST BOOK

Secrets can be fatal. But so can the truth.

When the murdered body of Lauren Shaw is discovered laid out on the altar of St Mary the Virgin church in Eastbourne it sends a chill to the core of those who have lived in the area for a long time. They remember another woman, also young and pretty, whose slain corpse was placed in the same spot 60 years ago.

Dee Doran is as intrigued as the rest but focused on her investigation of the whereabouts of a missing person from the Polish community. The police weren’t interested but Dee’s journalistic instincts tell her something is amiss.

But as she starts asking questions Dee finds the answers all point to the same conclusion - someone is keeping secrets and they will do whatever it takes to keep them safe.

A chilling and gripping crime thriller that fans of Fiona Barton and Alex Marwood will adore!

Sheila is an Irish crime writer living in Eastbourne. She is the author of two series of crime novels. The first, featuring DI Ellen Kelly, is set in South East London. The second series features journalist Dee Doran and is based in Sheila’s adopted home town, Eastbourne.

When not writing fiction, Sheila runs creative writing courses, offers a range of editing services and is a creative writing tutor for the Writers Bureau. She is a regular contributor to writing magazines and reviews crime fiction for crimesquad.com. She is also a regular guest on BBC Radio Sussex.

Her latest novel, When the Dead Speak, is out now.

Email ThisBlogThis!Share to TwitterShare to FacebookShare to Pinterest
Labels: #DiggingDeeper