Friday Fiction Feature: The Cry of the Lake

This week’s Friday Fiction Feature is from Charlie Tyler talking about The Cry of the Lake. 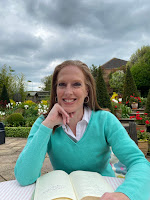 Have you ever pressed ‘post’ on social media and then realised, even though you’ve checked it several times, you’ve still managed to spell something wrong?  That sinking feeling is how I want you to feel when you read this psychological thriller brimming with misunderstandings and unfixable mistakes.

Writing and editing during Covid-19 has meant that, at times, it has been hard to keep focused and, although The Cry of the Lake was finished before this period of isolation, I think it reflects the unrest we’ve all, at times, been struggling with.  All of my characters are trapped in their own little worlds; one of the characters, Lily, has an embedded memory as well as having locked-in speech.  The language I use evokes that same panicky feeling of being caught inside a vivid, but surreal time warp – like being on the inside of a snow globe looking out at the world.  What you see on the surface; the cosy English pubs, the summer fetes, the quaint lakeside cafés and the sunshine will draw you in, though you won’t be able to leave until you’ve discovered what made Grace the monster that she is.  In a time where people of authority are saying one thing but doing another; this a thriller just right for 2020 and beyond; where you should no longer assume that what people in power tell you has a shred of truth to it.

The Cry of the Lake centres around the relationship between deeply troubled sisters, Grace and Lily, and Grace’s step-daughter, Flo.  The sisters have immersed themselves within an idyllic, chocolate-box environment, playing along at happy families whilst harbouring a terrible secret.  The setting is based on my own hometown and the surrounding villages.  I feature the well of King Charles I which, according to legend, was where he stopped at to water his horse after defeat at the Battle of Naseby (1645).  It sounds grand doesn’t it?  But unless you are actively searching for it, you wouldn’t know it existed – it is nothing more than a fenced off rectangle of slime!

A murder is committed and, though you know exactly who is responsible from the first paragraph, I have three strong, distinct, female voices all taking it in turns to tell you their side of events before you pass judgement on their actions.  And, although my anti-hero Grace presents herself to you as a completed jigsaw puzzle, throughout the story I dismantle her until you are left with the one solitary piece which explains her motives.  There is an all-important twist, but it’s up to you to decide whether it’s enough for you to sympathise with her behaviour.  I hope you’ll read it and share with me your views and, despite the trail of mayhem and murder, I would like to reassure you that it is also a tale of love, friendship and ultimately hope.

A gruesome discovery unravels a dark trail of murder and madness…

The Cry of the Lake is a psychological thriller set in an idyllic English village, where, despite tranquil appearances, the relationship between two families is about to turn toxic.

A six-year-old girl sneaks out of bed to capture a mermaid but instead discovers a dead body. Terrified and unable to make sense of what she sees, she locks the vision deep inside her mind.

Ten years later, Lily is introduced to the charismatic Flo and they become best friends. But Lily is guilt-ridden – she is hiding a terrible secret which has the power to destroy both their lives.

When Flo’s father is accused of killing a schoolgirl, the horrors of Lily’s past come bubbling to the surface. Lily knows that, whatever the consequences, she has to make things right. She must go back to the events of her childhood and face what happened at the boat house all those years ago.

Can Lily and Flo discover what is hiding in the murky waters of the lake before the killer strikes again?

Charlie signed with Darkstroke in May 2020 and The Cry of the Lake is her debut novel.

Charlie is very much a morning person and likes nothing more than committing a fictional murder before her first coffee of the day.  She studied Theology at Worcester College, Oxford and now lives in a Leicestershire village with her husband, three teenagers, golden retriever and tortoise.