Many thanks for allowing me to tell your readers about Undercover: Crime Shorts, my first collection of short crime stories under one cover, and hopefully not the last. 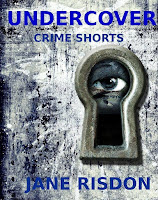 Undercover:Crime Shorts is a wonderfully satisfying anthology of seven short stories which transcend the crime fiction genre providing a ripping yarn with more twists and turns than Spaghetti Junction, irrespective of the reader’s fiction preference.

Sweet Sable: The Red Siren  (from Undercover: Crime Shorts – written in the style of the era of the crime noir fiction).

Sweet Sable is a Jazz singer in Hollywood in the late 1930’s, but that is not all – she has another talent which might just get her killed. She has skipped town after her sting - wealthy, married, dodgy, would-be politician, Jack Grady, discovers she has robbed his safe, taking evidence of his crimes and lots of loot, with her. He sets his henchman Carlo on her trail…

‘What do you mean, she skipped?’ Jack yelled at the thug in front of him who was sweating like a Chinaman in a restaurant kitchen. ‘How?’

‘I dunno, she just skipped.’ The man didn’t meet Jack’s eyes, hanging his head, terrified. ‘She got wind, is all.’

‘Got wind? How did that happen?’ Jack walked around his solid oak desk and stood almost toe to toe, with his flunky.

‘I belled her, told her nicely she gotta give your stuff back like you said. But she hung up. I went round there to persuade her, but she was gone already. Took off when I wasn’t watching.’

Jack sat down again and glared at the man in front of him who shifted uneasily. ‘I said scare the crap out of her if she didn’t play ball right away.’ He thumped his desk. ‘I meant get her to understand the implications straight off if she didn’t give. I didn’t say send her running. I didn’t tell you to take your eyes off her, not even to hit the john.’

‘She won’t go far, where she gonna go?’ We’ll soon find her boss.’ The man waited, it could go either way now, he knew. His life was in the balance. He could end up with a ruby necklace like Luigi who’d messed up big time last year. He was lucky he didn’t have to do the hit, he’d been friends with Luigi since they ran numbers for the Mob back in Vegas years ago. Who’d make his hit, he wondered, shivering in-spite of his sweat. He didn’t know how much more he could take. Numbers were one thing but killing: he’d had a belly full.

‘Your last chance, hear me? Your one and only chance. You find her, you get my stuff back and then you get rid of her. No mess, no noise, no-one will ever know what happened – not even me. Got it?’ Jack leaned over his desk and shoved his face right into the sweating man’s face. ‘Got it?’ he shouted again.

‘Sure boss, don’t worry, she’s history already, no sweat. We’ll get it all back.’

‘There’s no we about it. You do this on your own, you tell no-one and don’t tell me about it either. Do it, do it quietly and keep your mouth shut or you will be meeting Luigi faster than you can blink. You leave my stuff in my mailbox and I’ll make sure you get paid. Then you disappear. Now get out of my sight.’

Carlo ran from the room before his boss changed his mind. Now he had to find the broad before she did damage with what she took. His head ached with fear and worry. He’d be watching his own back from now on. He didn’t trust his boss any more than the would-be politician trusted him.

Who would I like to play them both in a film or TV series? That is a hard one. I can think of actors from the 1930s who would be great, but today? Cripes.

The creepiest action taken by a protagonist in Undercover:Crime Shorts is probably in The Honey Trap when the murderer – a serial killer – dispatches his victims during sex. He washes their hair, bathes them and dries their bodies before laying them out naked, in a certain pose, on a bed. All done with tender loving care. All done in the knowledge he cannot be touched for his crimes.

Undercover: Crimeshorts is the ideal companion for the crime fiction fan’s daily commute. You’ll run out of journey before you run out of book with this cleverly crafted mix of crime fiction short stories. Beware, as you might miss your stop.