Hannah Storm on Running and Writing

Hannah Storm shares her insights on the similarities between running and writing - in both of which she has a great deal of personal experience.

Years ago, I read Haruki Murukami’s ‘What I Talk About When I Talk About Running’, in which he explains how running informs his writing. For a long time, I didn’t realise how the same was true for me - that these two passions of mine have a symbiotic relationship.

I started running in my early 20s, but really started taking running more seriously around my 40th birthday in 2017. At almost the same time, I finally dared call myself a writer too.

Running and writing help me better understand myself and the world around me. They help me manage my mental health, process past traumas, offer me a space to think, to order, to see; sometimes simply to be.

When I run, I usually do so with an aim – a race in mind. Marathons are my favourite, though I’ve raced every distance from one mile to 55. In training, I follow a rough plan, set myself weekly targets with some flexibility, and more fixed monthly targets. This means if I wobble slightly one week, I won’t feel like I’ve failed because I have the rest of the month to get back on track.

Back in October, I set myself a goal with my writing: to finish the first draft of my novel by the end of March, or in around five months – the same length of time I’d train for a marathon. 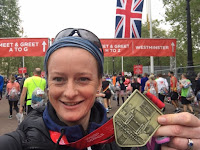 I made a plan for 20 weeks of writing, as I would for a race. I broke the 85,000 words down into manageable chunks, aimed for a weekly word count, gave myself flexibility over the four-week cycle. I factored in recovery days and opportunities to do other writing – like flash fiction – just as I pace myself and mix up my running with other exercise to avoid boredom or exhaustion.

I scheduled in specific events – like the races I enter before marathons to give me focus and test my fitness: a writing weekend in February, an online workshop, mentoring sessions with Michael Loveday, who helped me set my creative goals. It was a tough ask with a full-time job and two kids. Sometimes life got in the way, but I tried to stick to my targets as best as I could. I found a couple of writing buddies, shared my plans and progress. Like my running friends, they provided encouragement and accountability.

Over time, I became fitter, faster, more focussed at writing, just as with running. But there were days when I felt like I was wading through treacle, when I wondered why I bothered. Running and writing aren’t always easy. Some days I struggle to lace my trainers. Other days, I can’t face writing. On those days, I try to be patient with myself. I head out the door, aim for the end of the street. I set my clock to write for five minutes. Almost always I’ll keep going beyond the end of the street and after the five minutes – and almost always I’ll feel better for it. But I do try to not force it if I really can’t write or run.

If marathon training is a bit like novel writing, race day is an even more concentrated version. When the gun goes, there’s exuberance, anxiety, some denial, an element of imposter syndrome. I wonder what am I doing? How will I get through this? What kind of crazy am I? But slowly I warm up, remember to pace myself, start enjoying it, believing I can do this. I see the people and places. The miles pass by - if not entirely painlessly, then without massive effort.

I reach half way. There’s still a hellishly long way to go. Soon the reality hits, the magnitude of the task. I feel a fraud. I start questioning myself. My pace drops. Now it hurts. I don’t even like this anymore. Or myself. I hit the dreaded runner’s ‘wall’, stop, walk, shuffle, start again, planting one heavy foot in front of the other.

Writing my novel, I felt a little like this too. It started with a burst of energy, self-belief mixed with doubt. Could I really do this? No matter that I’d trained for the marathon, or written for years. The wall hit at 53,000 words. With another third to write, my heart sank. I remembered what happened when I ran the London marathon last year. I had written ‘stay’ on my hand -  a mantra used by Alexi Pappas, the Greek-American distance athlete. I kept repeating the word to myself when things got hard. I stayed the distance. And stayed with the novel.

Writing ‘The End’ felt as rewarding – and just as surreal - as crossing the finishing line.

Then it was time to celebrate, rest, and say never again.  Until the next time. 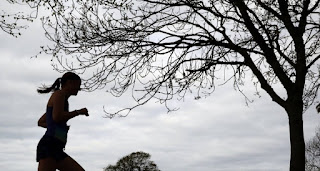 Hannah Storm writes flash fiction and creative non-fiction which has been published widely online and in print and has been placed in several competitions. Her debut flash collection 'The Thin Line Between Everything and Nothing' is being published by Reflex Press in June 2021. She has recently completed her novel - and is now in the edit stage - and is working on a memoir, provisionally entitled Aftershocks. She works as a media consultant and director of a journalism charity and specialises in gender, journalism safety and mental health.